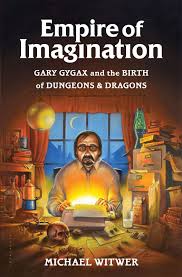 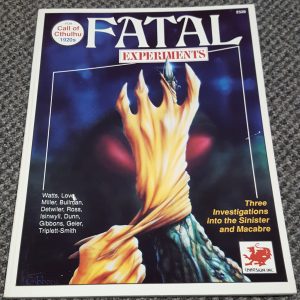 It was the summer after high school and my friends wanted to play Call of Cthulhu. I had read of few H.P. Lovecraft’s books which seemed to make me the Cthulhu expert of the group and thus I was elected to be the GM. I picked up the box set used at the local comic book shop and Fatal Experiments which was a bundle of adventures. The last sentence of the Lovecraft quote on the back of the book from the short story Herbert West: Re-animator (a favorite movie of ours!) set the tone for what kind of game we were getting ourselves into.

“The wonder and diabolism of the his experiments fascinated me utterly…. His views hinged on the the essential mechanistic nature of life and concerned mean for operating the organic machinery of mankind by calculated chemical action after the failure of natural processes…. My friend believed that artificial reanimation of the dead can depend only on the condition of the tissues; and that unless decomposition has set in, a corpse fully equipped with organs may be set going again in the peculiar fashion known as life…. He usually finished his experiments with a revolver.”

I haven’t played much Cthulhu since that summer, but I still have my box set and hope someday that I get another chance to play. In the meantime I have 5 “new” Call of the Cthulhu 1920s books that I recently picked up from a comic book store that was getting rid of their role playing game stock. These books are new, but they have been sitting on dusty shelves for close to 30 years so they do have some wear, dings, and even stains. Regardless 4 of the 5 are in excellent condition for soft cover books of that age and one unfortunately the glue of binding gave out and it has a split. All of the are up on my eBay store. Mansion of Madness, Terror Australis, Cthulhu Casebook, The Great Old Ones, and the one that I used to terrify my friends with Fatal Experiments.