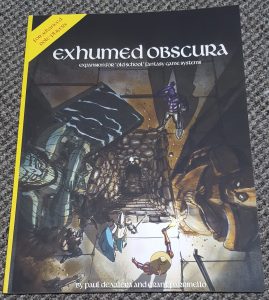 As I had said in my previous post that I had recently gotten back into Dungeons & Dragons after a long hiatus. The DM (Paul) and one of the player’s (Grant) were working on an expansion of rules for first edition AD&D. So I was one of the play testers / guinea pigs for what they had cooked up. I played a 1/2 Elf Ranger and was considered one of the base characters as to which help judge how some of the new classes stacked up to the classic roles. I am most likely NOT an impartial reviewer of this volume.

The name Exhumed Obscura is obviously a play on the Unearthed Arcana expansion. I think this is probably a good book to measure against. There have been many reviews, complaints, and arguments about the UA over the years and I will not rehash those here, but if you are one of those that think that the UA unbalances the game a lot of the new content especially in regards to character classes are probably not for you.

The book is 154 Page Soft Cover book and introduces 4 new stats, 9 new races, 11 new character classes, new spells, a few new weapons and armor, more magic items than can fit in your bag of holding, and critical hit and fumble tables. The artwork in the book is not professional, but is funny, charming, and decidedly old school. It reminds me of the box that used to be old character sheets so you could draw the portrait. This has only been released for physical purchase which is my preference for books as I prefer my table to be technology free.

Most of the new stats like Comeliness, Luck, and Perception have been used to some degree in other editions and other systems. Perception favors some classes to be more perceptive than others. Luck can tilt the odd’s in the players favor and I think a DM would be wise to remember for balance before implementing that monsters and NPC’s have luck as well. The most innovative stat is Bardic Voice and is used extensively for one of the new character classes called the Orator. For most others it doesn’t have much use, but I think it has fun role playing potential.

I am a little traditional and boring in regards to new races in my games as I play a pretty Tolkien populated world. The nine new races presented in Exhumed Obscura are interesting, vary widely, and some are more usable than others. What I like most is that the description of each race is proceeded with a short story that gives you some idea of the flavor of the race and their place in the world. The Tinelian Cat-People are a race of seafaring cats, Mendelinkorian are long lived, asexual, underground dwelling, magic users, Ghoule are a special kind of undead that have broken free from their necromancer masters, and Jorakeen (Wolf Men) that are tall humanoids that have the heightened senses of wolves.

The new character classes will be what most players of the game will be interested in and there is something for everyone. There are a couple like the anti-paladin and the necromancer that if I recall correctly had been done in different ways before in old The Dragon magazines. Some of the others are more unique and come with their own disciplines, spells, or as in the case or Orator entirely new ways of thinking in how to effect the world around them. Again as with the races they have used short stories to give you insight and flavor in how the class is supposed work. In the group I played with we had a Blood Guard and an Orator as well a reoccurring antagonist that was a Ghoule Targeteer. The Blood Guard is a mix of a fighter and cleric that serves to protect. They are front line fighters, but use their actions more to protect their compatriots from attacks than to take down foes. They gain the use of Cleric spells at 5th level.  The Targeteer reminds me of another Dragon Magazine class the Archer except they are not as limited. Specializing in the crossbow with some Thief abilities (at 2 levels lower) they could be a good addition to party where no one wanted to play a traditional Thief.  The Savage is similar to the Barbarian class, but has learned control in their fighting. A unique table of skills for unarmed combat is provided so as the class progresses in levels they get fighting moves that no one else has. The Orator is a singer of great talent that uses their voice to control harmonic vibrations and create a sort of magic. While this in many ways the most thought out of the new classes it also the one that I think has the potential to cause problems in a game. Much of the mechanics and effects are left to the DM to decide and some of what can be done with this new magic a creative player could bend to their advantage. It would certainly take an experienced player and Dungeon Master working together to make this a player character that harmonizes with their world. The other classes brought to life in the this book are a Dark Druid (would be a great NPC nemesis), Pit Fighter, Fighter Magic User, The Hand (Assassin / Spies), Knight of the Brotherhood of Elemental Orders (Fighters with some control over the elements), and Spirit Hunters (Ranger / Druid).

Always a favorite for DMs and players alike are the 36 pages of magic weapons, armors, potions, rings, wands, and the like. At the end of the book there are some rules for mass combat, some new weapons and armor, a few critical hit tables for crushing, slashing, and impaling weapons, and new character sheets that have spaces for the new stats included in this book.

I am always looking for new material and flavor to add to my campaigns so I think this will be a good resource when what is presented is judiciously added. I have a number of them available up on my ebay store, but not sure for how long as the last smaller batch sold out in a week.

It had been close to 20 years since I had played Dungeons & Dragons. Well at least in any meaningful way. I had moved to Los Angeles and there were plenty of other things and interests that had grabbed my attention. Not to mention that I couldn’t find anyone who actually played the game or wanted to. The people I was hanging out with were not the D&D types and although they found my nerdy ways endearing they weren’t ready to jump in and embrace them as their own… plus this is LA and even with the least image conscious person image does matter.

I was in a very good place in my life, married, a toddler, and running a successful business. Regardless I would think back fondly on the times with friends gathered around dining tables, living rooms, libraries, lunch tables, and classrooms playing Dungeons & Dragons. I was not getting the same fulfillment in the things that I was doing socially; video games, dinners, clubbing, and especially not ‘social’ medial. I learned about Roll 20 and playing over Skype, but I have enough technology in my life. I wanted to sit around a table with a group of people and immerse ourselves together in a story, fantasy, and these shared experiences. It was time to find a D&D group!

That is how I found myself on the internet, browsing Craigslist, and looking at a gamer wanted ad. They were playing 1st Edition AD&D and meeting every other week…. in the Valley. This is Craigslist so there was some thought running through my mind of how unappealing it was going to be to get murdered in Reseda, but I threw caution to the wind and sent them a message telling them about my experience, lack of recent experience, and that I was committed (or should be committed) to make the hour plus drive to the Valley on Friday nights.

It was a chilly fall night and the traffic on the 101 going through the Cahuenga pass was the usual crawl made only worse by my own excitement and nervousness of jumping into an existing campaign with a bunch of strangers. I picked up the usual snacks and drinks at 7-11 and made my way to the address to find a small nondescript house. The sound of boisterous voices and laughter could be heard from the walk and that alone made it easier to knock on the door and introduce myself. A group of four guys were already there and they were waiting on two more. The group was play testing some new character classes for an “old school” supplement they were working on (This has since been released as the Exhumed Obscura – here on ebay – I will write a review of it soon) and I had decided to play as a ‘baseline’ character a half-elf Ranger to help them see how things balanced out. The group of guys had been playing together for many years and the course of the adventure got derailed by inside jokes and the like, but by the end of the night I had meshed with the group and gotten myself beguiled by their quest item.

Driving home while listening to KPFK I relived the nights adventure in my mind and knew that I had found a home among my fellow role players. It was going to be a long two weeks before I got a chance to play again!

Hi there and thanks for visiting. Most of you coming here have either bought something from me off of eBay or have interacted with me in some way or another on Twitter.

Slowly over the next year I am going to be developing this into a site for selling the enormous amount of role playing games that I have collected (D&D, GURPS, Shadowrun, Battletech, Pathfinder, & OSR) and collections I have bought. As well as a place to put my musings that exceed 140 characters, game reviews, and life as a game master.

I will still be selling on eBay as I think that is a good marketplace and it certainly exposes me to a lot more buyers than what my little site ever could. Heck in the meantime you ought to go browse my store!